The person behind Royal T Fitness is Trennesse Nicol Mosley also known in the Fitness world as Coach T, she is a native of New Orleans, LA where she currently resides. She is the mother of two and grandmother of one. Health and fitness are her passion, especially running. It’s funny, because as a teenager and young adult she did not like running.  In her teens she signed up to join the neighborhood track team but quickly realized that structured running was too hard and she quit, not wanting to make that level of commitment and besides it was too hot to run.  Luckily, she continued to perform gymnastics and dance during her childhood and high school years. She credits those structed activities for helping her achieve the level of commitment she carries today.

As a young adult she continued to exercise although it was not consistent, trying step aerobics, Tae Bo, Pilates, and Yoga. In her mid 30s life changed, she HAD to exercise because of impending health issues; high cholesterol was present; one of the things she deemed a genetic death sentence. In 1996 Coach experienced a mini stroke or the medical condition; TIA (transient ischemia attack) too much stress, a bad diet and too much weight on her 5’2 frame. Whatever exercises she was doing, it was not working, maybe it was the amount, the intensity or not combining exercise with the proper diet.

She discovered walking or jogging was easy, cheap and didn’t require any equipment just a small investment in running shoes. She quickly found that running was an easy transition from jogging. The more you do something the better you become at it. Her first competitive race was a 5k (3.1) miles in 2002, The St. Augustine Raymond Minor 5k at Audubon Park. She was 38 years old, some would say a little old to start a competitive running program, to her surprise she won her age group division, running 3.1 miles in 39 minutes and 42 seconds. Now, 19 years later she chuckles when she sees that time because now she’s a faster and more efficient runner. That race was not only a win for her in the competitive sense it changed the way she began to live the rest of her life, it was a win for health and and more importantly, survival. She admits it gets hard sometimes to keep up at the pace she has set for herself but she’s a firm believer that, it’s worth it, she’s worth it.

Coach T is currently a race committee member for Youth Run NOLA. Her past associations include, former Coach for Girls on the Run, Instructor for the Fit Lot Park in Association with AARP and a guest speaker for health and fitness at local high schools.

Hopefully this story will inspire and motivate you. This is the mission of Royal T Fitness, to show mature women that it’s not too late to improve their health, lose weight or improve your fitness with simple lifestyle changes. Be sure to join the Facebook Group; Training & Coaching Females 40+. Let’s get started on this new journey together and remember: “Don’t Weight”. 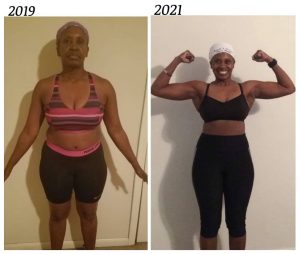 If you are in need of a little more help in the nutrition area, I’m also a nutritional cleansing coach.

We’ve all heard exercise and healthy eating gives you the best outcome for better health. I’ve mastered the exercise part but the past two years I’ve been struggling with the healthy eating part. Job stress, hormonal imbalances and slowing metabolism have sent my eating off the rails. It doesn’t matter that I’m a trainer and exercise instructor who works out six days a week. My nutrition was in need of a major overall.

I’ve been doing the nutritional cleansing for almost 2 years and I can see and more importantly feel the difference in my body. I feel more energized, more powerful, less bloating and better sleep. It was a little rocky in the beginning because I was doing a major system overhaul. This nutritional cleansing has been a game changer for me, my nutrition is finally aligning with my workouts.

The Ultimate Guide To a Healthy Lifestyle – Isagenix